Gandhi and My Irony 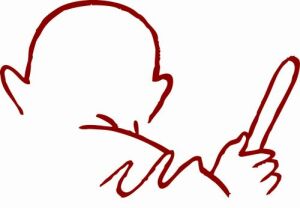 Condemning Gandhi has become a fashion these days. People don't understand and can't appreciate what he has done. They must realize that the real force behind uniting the nation was Gandhi. For years we have lived as Feuds and the idea of being a "Nation" was not known. He consolidated the masses and gave them voice. He united people. Satyagraha was not an easy thing to do. It needed support of many from the front and also of the people who were sitting in their homes.

People, including myself, will keep on living a life facing and seeing cruelty, but no one will come forward and say anything. This is a general attitude of the people that why should I bother, I have a family to keep. Why should I get involved in these things? Not every person could have left his/her family to join Freedom Struggle. Not everyone was capable to raise voice against an empire. Until this happens you just can't bring revolution. It is the people who have to come forward and raise voice and act. It was not possible in India because people were not ready. They had no idea of Nation-hood, the belongingness. It was Gandhi's Satyagraha that gave them understanding of Nationhood and belongingness. This was what was really required.

Many will say the withdrawal of Non-cooperation movement after Chauri-Chaura incident was wrong. But I fully agree with the decision. When you are peacefully protesting something or someone, it means to do things "Peacefully" may come whatever. This is called discipline. When discipline is broken, action should be take against this. This is called responsibilty. If you still don't agree with Gandhi on the issue, then you won't understand - "Discipline" and "Responsibility". Today our leaders don't understand these two words and we keep cribbing about this. But how will they when we are also on their track. If you dont agree with Gandhi on the action he took after Chauri-chaura, then you should not crib about today's leaders.

The mindset of today's people to deny Gandhi of his stature is ironic. His own people can't understand him. It is ironic that I have to write these things for the man, about whom, I don't deserve to write. He was great and will remain great.