[Book Review] Early Records Of British India: A History Of The English Settlements In India by James Talboys Wheeler 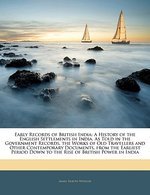 The book name is Early records of British India: a history of the English settlements in India, as told in the Government Records, the works of old travellers and other contemporary documents, from the earliest period down to the rise of British power in India.  I happen to read it few years back and loved it. Though I could not finish reading it but there remains this interest to complete it. Still searching for this book in a good condition. I can buy it online like I normally do but would love to buy it from a book shop.

This book is a great book on the history of English settlements in India. This is not like a general history book which defines major events but goes through the complete array of happenings and discussions leading to the  settlements and thereafter. An interesting read. It gives a comprehensive details of the political, economical, cultural and social environment in those days when the Europeans were trying to establish themselves in India. It defines how one event lead to other and finally how British became powerful. The sketches of  courts and residences of Mughal Emperor,  Nawabs, traders, merchants etc. is wonderfully done and you seem to think that you are present at the scene.

It would be interesting for anyone who want to learn about British Settlements in India. And since it quotes the original descriptions, communications and documentation, there is nothing hidden. I will give it 4.5/5.