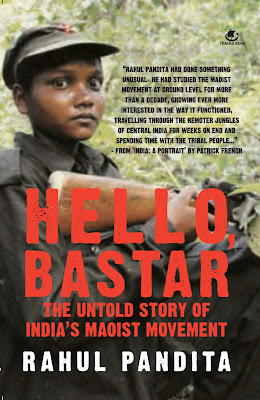 Few years back I was searching for information on Naxal Movement in India, when I encountered website of Hilary Pais. I found good amount of knowledge about Naxals or Maoists. It is one of the best-written documents about Naxalism. However, one thing that lacked was the views of Naxal Movement leaders and members. Rahul Pandita now fills this gap in his book “Hello, Bastar.” This book mentions anecdotes after anecdotes and keeps answering questions that you must have thought about:

How the idea of creating a guerrilla base in Bastar came up?

How Maoists and their guerrilla squads function?

What are their goals? How do their recruit?

What kind of relationship they have with people and peoples’ movements?

And many other such questions.

It answers why highly literate people are attracted towards it. What is that attraction that pulls doctors, engineers, etc. towards it?

This book attempts to answer them all.

Let us know some facts about the Maoist movement, which has come to the fore in the recent years, before commenting on the book.

Under this backdrop, it is important to understand and have knowledge about Naxal menace. Rahul Pandita’s book helps you in knowing this.

I have all praise for Rahul Pandita for taking pain in sharing so many anecdotes, which must have required a lot of patience and research. The book is an outcome of real hardwork as the author has gone to the Naxal area, built rapport with them and has managed to get some real anecdotes and real pictures. That definitely would have required deeper and sincere understanding of the misery of the people and good rapport with the “Comrades.” I have only found photographs in some History books and it make reading a book more interesting. Pictures do speak thousand words!! ;)

Rahul has written a lot about Maoists, their misery, their plans and their outlook of the society without talking from government’s perspective. It is both a negative as well as positive. Negative because there would be people who would like to know the situation from both the perspectives. Positive because we are going to get the other side of the story anyway from the government itself and so it makes sense to concentrate and bring the views and story from the other side of the table and Rahul has done that “immensely” well.

The book has made my views of dealing with the situation stronger. A purely security-based approach in dealing with Naxalism is hardly likely to succeed. The need of hour is to improve people-centric development and schemes. Also, more than that we need to sensitize the public servants about the people-centric approach and to make them understand that it is not their kingdom where they can do anything they want. They have to understand that they are “public” servants and have to work likewise. Governance deficit must be resolved as early as possible. Before ending, I would like to quote Rahul from the book to summarize the debate: “It may sound like a far cry, but it’s not as far as the government thinks it is.”

P.S.: -This review is a part of the Book Reviews Program at BlogAdda.com. Participate now to get free books!